How To Cope With Seasonal Affective Disorder (SAD) 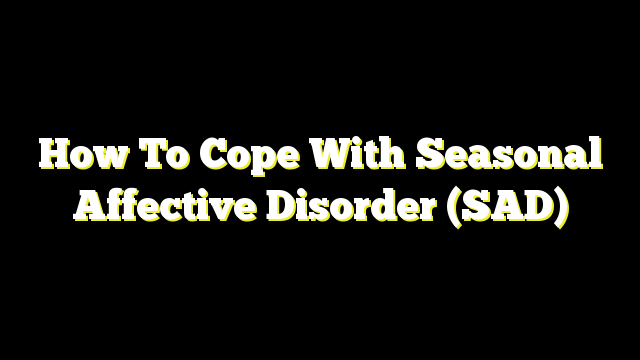 How To Cope With Seasonal Affective Disorder (SAD)

Winter is famously hard on mental health, but it can be unbearable for people who suffer from seasonal affective disorder.

What is seasonal affective disorder?

SAD, as it’s known for short, is a type of depression that strikes during a particular time of year, most often during late fall and winter. In the U.S., the most difficult months for SAD sufferers are usually January and February, though patients can start to feel a sense of dread near the end of summer, said Kelly Rohan, a psychology professor at the University of Vermont who has been studying the condition for almost 20 years.

“SAD is clinical depression. That surprises a lot of people — I think they confuse it with the winter blues,” Rohan told TODAY.

“There’s evidence the symptoms have been with us since the beginning of time. … Thousands of years ago, ancient physicians and philosophers were writing about the impact of the changing seasons on mood.”

To seek relief, some people turn to dietary supplements such as St. John’s wort, vitamin D and melatonin. But little research has been done in this area, and there’s limited evidence they provide any benefit, the National Center for Complementary and Integrative Health said this month.

Still, there are treatments that truly help. Here’s what you need to know.

About 5 percent of adults in the U.S. experience SAD, according to the American Psychiatric Association, with the condition diagnosed up to four times more often in women than men. It’s not clear why women suffer more, but Rohan suspects gender differences in nonseasonal depression offer clues. Women tend to ruminate more than men — they get stuck in a loop of excessive worry that makes them feel worse — and this may apply to SAD as well, Rohan said.

SAD is more frequent in people who live far from the equator, so New England residents are more at risk than Floridians.

The signs are the same as those of depression, the American Psychological Association noted. They tend to begin in the fall, persist throughout the winter and then fully resolve in the spring, with the average SAD episode lasting five months, Rohan said. Studies have found people can be “severely incapacitated and unable to function.”

Common antidepressants known as selective serotonin reuptake inhibitors can help, but they can come with side effects such as nausea and nervousness.

Studies have shown a light therapy box that emits a very bright light while filtering out ultraviolet rays can be a “very effective treatment,” Rohan said. To get the full benefit, a SAD patient needs to sit in front of it for 20 to 60 minutes a day, typically first thing in the morning, throughout the winter. Most people see some improvement within one or two weeks, the American Psychiatric Association noted.

It works on the theory that people with SAD have a slow-running biological clock, Rohan said. Their melatonin production is shifted later than it should be, and when morning comes, their bodies are telling them it’s still night.

“So this big burst of light first thing in the morning to simulate an early dawn will, in theory, cut off that melatonin production and shift the biological clock back the way it’s normally functioning in the summer time,” Rohan noted.

She advised consulting a mental health expert to find out how long you should use the light therapy box each day rather than just figuring it out on your own. An incorrect dosage can leave you with side effects such as headaches, eye strain and “feeling wired.”

For a more organic option, Rohan recommended going out for a walk first thing in the morning after sunrise. You’ll get much more light than a therapy box can provide with the added benefit of physical activity.

Also known as talk therapy, this is the approach Rohan has been testing for 18 years. Therapists teach SAD patients strategies to cope with the winter season and develop better habits. For example, rather than defaulting into “hibernation mode” in winter — going straight home from work, getting under a blanket and mindlessly watching TV — patients take baby steps toward a more normal, fun routine. They’re also encouraged to replace negative self-talk with more neutral thoughts.

What to know about dietary supplements

Alternative medicine may not do much for SAD and comes with safety concerns in some cases. Here’s what the National Center for Complementary and Integrative Health has to say:

Will taking a trip south help?

Heading to a sunny, warm place in the middle of winter will help SAD sufferers feel better in the short-term, but the re-entry can be dramatic, Rohan said.

“You’re going to feel awesome while you’re there, but coming back is hard,” she noted. “It’s like you go to bed on July 4th, and then the next day you wake up on the winter solstice.”

The Perception of Type 1 Diabetes versus Type 2 Diabetes