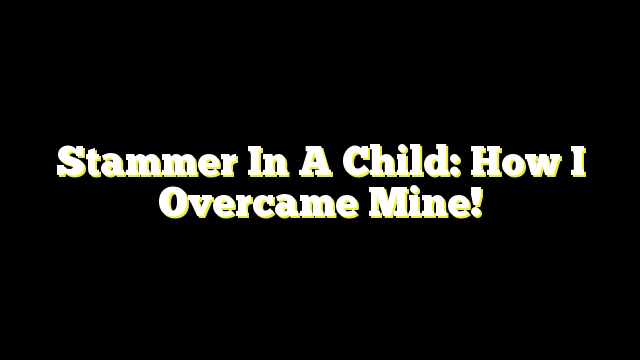 When a child starts to develop a stutter/stammer, it comes as a shock to everyone involved. It can be a very stressful time for both the parents and for the child.

I myself stuttered at the age of four or five. My mother had left work to take care of me when I was born and began to speak normally. Everything was fine until I came to school. My mother, who now had more free time, decided to return to work and went to school with a friendly family. The name of this friend was Jean and she had a son my age called Graham. On the first day I spent at home, everything was fine until Jean called us for dinner. The dining moments in my own house were very relaxed, we could eat our food where we wanted it in the house.

At Jean’s, they ate around a table in a dining room. There were a lot of people around the table that I did not know so well, and eating before everyone made me uncomfortable. During the meal some questions were asked and for some reason I tried to answer and stammered. It was the first day of my life as a human stuttering.

A few months later, my parents introduced me to speech therapy. The speech therapist told them that most children would grow up stuttering. Unfortunately, I stuttered on until I was twenty-two years old. At that point, I decided I had enough and that it was time to defeat the stammer.

I decided to try and find my own stuttering solution. I went about this by reading books about self-confidence as I certainly had low self-esteem. I also studied people who I believed were very good talkers and tried to work out how the spoke differently than me, for example, the way they breathed.

After nearly a year I was proud to be able to class myself as fluent and as a career, I now help other people to achieve fluency.