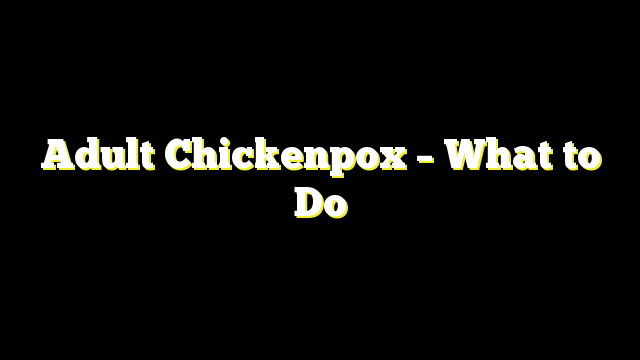 Adult chickenpox affects less than 5% of the population. For some reason this small percentage of them don’t get the virus as a child. It is a rare phenomenon as children they go to school with get it as do their siblings. If an adult does get chickenpox though it is often worse of an outbreak than it is for a child. Many adults feel very silly when they end up with an outbreak of chickenpox as well.

Due to this reason, many adults that have never had chickenpox have asked for the vaccine to be given to them. Other than a couple of days of soreness most are just fine and can go about their normal activities without any problems. Children only need one shot of the vaccine but those over 13 years of age will need to get two. They should be spaced out by at least three months.

Chickenpox Relief. You Need it

Symptoms of Chicken Pox. Be Alert!

Who Can get Chicken Pox?

This is thought to be a good idea for those women that may one day become pregnant. Contacting chickenpox during the pregnancy can result in severe problems for the baby. There is a medication that can be given to help reduce the risk of it after exposure. Make
sure you see your doctor immediately if you are pregnant and someone you have been around has chickenpox.

Another reason why adults that haven’t had chickenpox should get the vaccine is for their own health. You just never know when you will come down with a serious ailment. These can weaken your immune system and that can lead to a serious infection or even death from something as simple as chickenpox. While it rarely happens it isn’t something you should take a risk with due to it being preventable with the vaccine.

For adults that do contract chickenpox, your doctor can give you medication to help reduce the outbreak. They can also help to clear up the chickenpox faster so you can get back to work and your daily activities without the risk of infecting others. You can take an over the counter pain reliever to help with the itching. Avoid scratching the sores so you won’t get an infection or end up with scars.