Are There Herbs That Shrink Fibroids Fast? 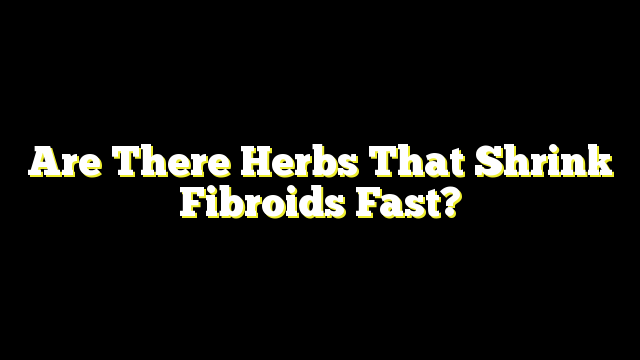 Are There Herbs That Shrink Fibroids Fast?

This is a big question on the minds of several women plagued by Uterine Fibroids and are uncomfortable with a surgical intervention. There are some unregulated Chinese herbs that are purported to melt or Shrink uterine fibroids. In the medical field however, doctors accept that fibroids can shrink but that is mainly due to hormonal changes. So when one hears the several TV advertisements and radio commercials about vanishing Fibroids, One must move cautiously so that noone is duped in their hour of need. Let summarize this condition for your understanding.

Fibroids range in size from seedlings, undetectable by the human eye, to bulky masses that can distort and enlarge the uterus. You can have a single fibroid or multiple ones. In extreme cases, multiple fibroids can expand the uterus so much that it reaches the rib cage.

Many women who have fibroids don’t have any symptoms. In those that do, symptoms can be influenced by the location, size and number of fibroids. In women who have symptoms, the most common symptoms of uterine fibroids include:

Rarely, a fibroid can cause acute pain when it outgrows its blood supply, and begins to die.

Fibroids are generally classified by their location. Intramural fibroids grow within the muscular uterine wall. Submucosal fibroids bulge into the uterine cavity. Subserosal fibroids project to the outside of the uterus.

See your doctor if you have:

Seek prompt medical care if you have severe vaginal bleeding or sharp pelvic pain that comes on suddenly.

Doctors don’t know the cause of uterine fibroids, but research and clinical experience point to these factors:

Doctors believe that uterine fibroids develop from a stem cell in the smooth muscular tissue of the uterus (myometrium). A single cell divides repeatedly, eventually creating a firm, rubbery mass distinct from nearby tissue.

The growth patterns of uterine fibroids vary — they may grow slowly or rapidly, or they may remain the same size. Some fibroids go through growth spurts, and some may shrink on their own. Many fibroids that have been present during pregnancy shrink or disappear after pregnancy, as the uterus goes back to a normal size.

There are few known risk factors for uterine fibroids, other than being a woman of reproductive age. Other factors that can have an impact on fibroid development include:

Although uterine fibroids usually aren’t dangerous, they can cause discomfort and may lead to complications such as anemia from heavy blood loss.

Fibroids usually don’t interfere with getting pregnant. However, it’s possible that fibroids — especially submucosal fibroids — could cause infertility or pregnancy loss. Fibroids may also raise the risk of certain pregnancy complications, such as placental abruption, fetal growth restriction and preterm delivery.

Although researchers continue to study the causes of fibroid tumors, little scientific evidence is available on how to prevent them. Preventing uterine fibroids may not be possible, but only a small percentage of these tumors require treatment.

But, by making healthy lifestyle choices, such as maintaining a normal weight and eating fruits and vegetables, you may be able to decrease your fibroid risk.

Is Your Child Thumb Sucking? Read How to Help.