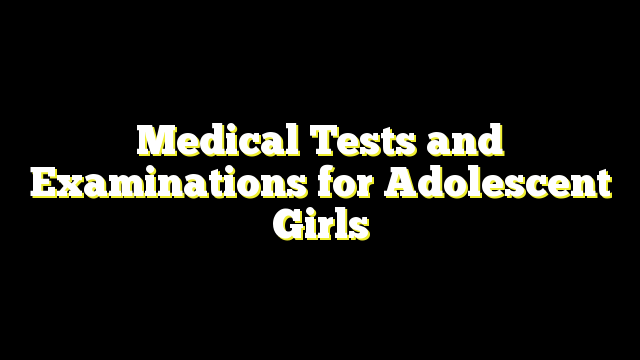 Adolescence is the time when girls face many changes as they not only become physically mature, but sexually, too. In order to maintain good health, they need to consult gynecologist, adolescent medicine physician and obstetrician. Adolescents who are sexually active need to get some test done like pelvic examination, Pap test and test for checking sexually transmitted diseases. This helps the early determination of conditions that can affect reproductive, gynecological and sexual health.

Schiller test is conducted where the iodine solution is used to cover the cervix. In colposcopy, colposcope is used to check the cervix and the vagina. Cancer is checked by biopsy. In this a small quantity of cervical tissue is removed and a pathologist checks the tissue for abnormal cells.

The most important test is the Pap test or a pap smear. The cells from the mouth of the womb or the cervix are collected to check for cancer, abnormal cells, infection or inflammation. The detection of abnormalities shows signs of cancer. Therefore it is recommended that every female must take Pap test regularly to check out for invasive cancers in the early stages itself. And if invasive cancer is detected, it can be successfully treated in the early stages. Apart from detecting invasive cancer, other changes, such as cancer cells or dysplasia and inflammation, of the vagina and cervix can also be determined. Inflammation can be caused by pregnancy, abortion, miscarriage, hormones, trichomoniasis infections, viruses, bacteria, yeast infections, and other medication.

The repetition Pap test will be suggested by the gynecologist. When a girl becomes sexually active, she will have to test for cervical cancer after three years of becoming active because it usually takes many years for the significant development of cancer or abnormality. Usually there are some cervical cell changes and transient human papilloma virus infections or HPV infections which are very common. Therefore, a Pap test for cervical cancer is recommended every three years. But women who are under thirty years are at a higher risk of getting HPV infections of higher risk. It would be more feasible if every individual takes advice from her doctor about when she can begin screening, the frequency of the test to be taken, and when she can discontinue the tests.

In a Pap test, if abnormal cells are determined, usually more tests are recommended to detect abnormalities which will require treatment. Abnormal Pap test will be handled differently for adolescents when compared to adults. Usually the low grade cervical lesions will not require any treatment and will go away on their own. That is the reason why the Pap test is repeated after a gap of six to twelve months, after the original Pap test which identifies abnormalities. But this repetition will vary from individual to individual depending on her health status and kind of abnormalities found.

Myths About What Causes Acne

Myths About What Causes Acne