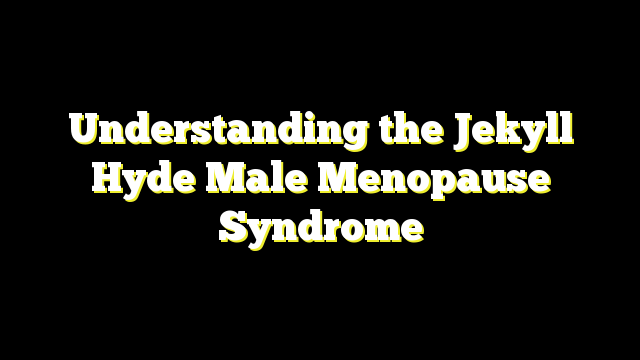 Andropause is a condition brought about by low levels of testosterone throughout the man’s body. It normally occurs in men aged 40 years old and above where they experience symptoms similar to women’s menopause. However, changes in men are gradual, characterized by fatigue, changes in moods and attitudes, and loss of physical agility, energy, and sex drive. Studies show that men may even acquire the Jekyll Hyde Syndrome or Irritable Male Syndrome (IMS) which can later on affect the people around him.

A lot of people are familiar with the book written by Robert Louis Stevenson entitled Dr. Jekyll and Mr. Hyde. It speaks about human psyche dealing with the mind of a male in particular. Dr. Henry Jekyll has a life-long pursuit of separating man’s two natures to obtain the essence between evil and good.

A Guide in Surviving Male Menopause for Men and Women

Dr. Jekyll superiors and friends refused to help him. However, he succeeded in doing his experiments using his formula, but the results were shocking. Dr. Jekyll’s evil nature, Edward Hyde, surfaces with a separate identity. Hyde starts to murder those people who refuse to support Dr. Jekyll’s cause. From then on, Dr. Jekyll keeps on fighting to control his evil half.

It is really shocking that this transformation could occur with men undergoing andropause. Their attitudes can suddenly change from being once a loving and sensitive person to becoming mean and uncaring. Some wife does complain to their husbands that they completely changed from being Dr. Jekyll to Mr. Hyde.

There are pointers to understand in the manifestation of this syndrome. Mostly, men who experience IMS can really change apparently overnight. He could appear so peaceful, loving, and contented but suddenly he freaks out as agitated, mean, and discontented. Other factor which triggers the condition involves a crisis of a relative or close friend. It could also be a difficulty in achieving his real identity since he has different roles such as being a father, a son, a husband, or a friend. This leads to confusion and fear thinking that he has to destroy his old version to move into something new.

IMS has affected a lot of men. It was mentioned earlier that plummeting testosterone levels can cause a man to become withdrawn and irritable which is considered an internal cause. However, external causes also trigger IMS in men. It can include physical injury or illness, or a relationship or job loss. So he thinks that his problems are caused by another person thus complaining more about it. Then he justifies it with anger to release the blame viewing the world via distorted lenses.

But not all men acquired IMS. There are four factors that should come together to develop IMS. It is determined by changes in hormones, brain chemistry, loss of identity, and stress levels. You just can’t easily rate men who are irritable and angry with IMS. They should take the tests to be sure that they have IMS since being irritable and angry are normal.

Men can seek counseling to treat IMS so that they could prevent themselves from becoming Mr. Hyde of course. Men having low levels of testosterone can have testosterone restoration. Right diet and exercise is also significant. Exercising can increase testosterone levels. But keep in mind that low-carb diets are not helpful. Low carbohydrates can lower serotonin levels making men irritable. Remember, understanding IMS and seeking proper help is worth all the effort.