What Is The Difference Between Lung Cancer and Lymphoma? 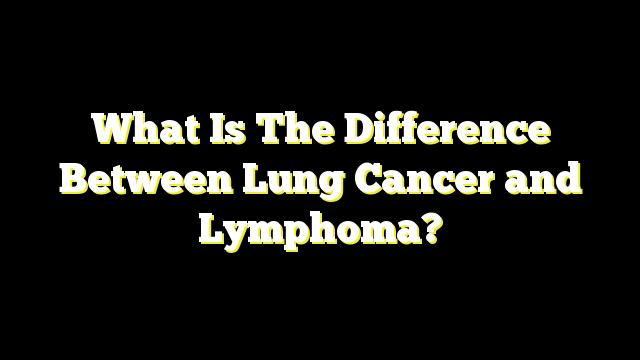 What Is The Difference Between Lung Cancer and Lymphoma?

There are two different types of lung cancer that may affect anyone:

1. Primary lung cancer is categorized as either small cell, or non-small cell, and usually begins in the lungs before it spreads to other parts of the body. Small cell is commonly associated with heavy smokers, where non-small cell may include other types of cancers such as squamous cell, large cell carcinoma, and adenocarcinoma.

Symptoms may include a persistent cough, coughing up small amounts of blood, wheezing, shortness of breath, chest pains, a dull aching pain in the shoulder that may move down the outside of the arm, a notable weight loss, and recurrent chest infections or pneumonia.

Diagnosis of lung cancer is not usually found until after a doctor has ordered a chest X-ray which is usually associated with another illness. If lung cancer is detected by the chest X-ray, a CT (computer assisted tomography) scan, or a MRI (magnetic resonance imaging) scan may also be ordered to further confirm both the diseases diagnosis and staging.

Staging includes a limited Stage, where only one lung is affected together with the surrounding tissues, and an extensive Stage, where the cancer has spread to either the chest tissues outside the lung of origin or to another part of the body. Staging begins with Stage 0, where cancer cells are found to be in the lining of the lung; Stage 1A, where the tumor growth is no more than 3mm across in diameter and continues through Stages 1B, 2A, 2B, 3A, 3B, until Stage 4 is reached. This is where the lungs or other parts of the body have multiple malignant growths.

Symptoms may include fever, fatigue, itching, swollen lymph nodes, and sweating during the night while sleeping. The lymph nodes can be found in clusters in the pelvis, neck, under the arms, and in the abdomen. When non-Hodgkin’s lymphoma is present, it is common for its reason to be unknown.

Diagnosis includes blood tests, and a biopsy of the lymph node tissue for examination under the microscope.

Staging is based on the extent the tumor has spread.

Stage 1. Where only one lymph node or area is affected.

Stage 2. Where two or more lymph nodes are affected on one side of the diaphragm, or a single lymph node where the tumor has affected a nearby organ.

Stage 3. Where lymphoma is found in the areas above and below the diaphragm, and is considered to be advanced.

Stage 4. Where the lymphoma has metastasized to other parts of the body such as the liver, brain, or bone marrow. At this stage the disease is considered widespread.