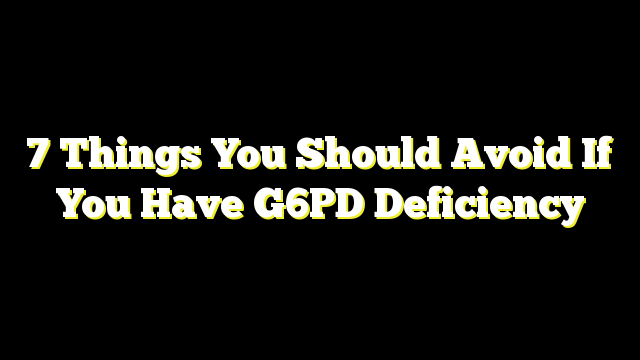 Glucose-6-Phosphate Dehydrogenase or G6PD deficiency is a hemolytic anemia (anemia secondary to excessive red blood cell breakdown) secondary to a decreased amount of G6PD, an enzyme in the red blood cells. Fortunately, most people with G6PD deficiency only have severe hemolysis when exposed to a certain medications or foods. Let’s review some of the common things that can cause problems.

People with G6PD deficiency can tolerate most antibiotics but should be aware of a selective few that can initiate signficiant hemolysis. Antibiotics referred to as “sulfa” drugs should be avoided. These antibiotics are typically used to treat skin or urinary tract infections. The most common form of these antibiotics go by the brand names Septra or Bactrim.

The “quinolone” antibiotics should be avoided as well. The two most common antibiotics in this group are Cipro (ciprofloxacin) and Levaquin (levofloxacin). These antibiotics are commonly used in adults to treat urinary tract infections and pneumonia.

Nitrofurantoin is another antibiotic used to treat urinary tract infections that can cause problems in people with G6PD Deficiency.

Primaquine, a medication used to treat or prevent malaria, can trigger hemolytic crises. Having G6PD deficiency can protect you from being infected with malaria. This is why maps of areas with malaria and G6PD deficiency are similar. It is recommended that people be tested for G6PD deficiency prior to taking primaquine. This includes breastfeeding infants whose mothers take primaquine. Other anti-malarial drugs are tolerated by most patients.

Doxorubicin, a type of chemotherapy, can trigger hemolysis in certain types of G-6-PD deficiency. Rasburicase is a medication used to treat tumor lysis syndrome, a medical complication of hematologic cancers, should not be used in people with G6PD deficiency. It is recommended that people be tested for G6PD deficiency prior to receiving rasburicase secondary to this risk.

Aspirin, commonly used to treat pain or inflammation, should be avoided. It is important to remember that aspirin is found in many over the counter medications like Anacin, Bufferin, Ecotrin, Excedrin, BC Powders and Goody’s Powders. Aspirin is also found in Pepto-Bismol. In general other over the counter pain relievers like acetaminophen or ibuprofen are tolerated without issues.

Yes, people still use mothballs. Mothballs can contain a chemical known as naphthalene which can trigger hemolysis. Naphthalene can also be found in fumigants, particularly those used to keep snakes away. Naphthalene is a vapor given off by these products so exposure may come from inhaling the vapor or ingesting them.

There are case reports published indicating henna (used for temporary tattoos or hair dye) has triggered hemolytic crises in people with G6PD deficiency. Newborns under the age of 2 months appear to be more susceptible to this reaction. Henna  is a dye prepared from the plant Lawsonia inermis, also known as hina, thehenna tree, the mignonette tree, and the Egyptian privet used mostly during Islamic festivities to draw tattoos on one’s body.

G6PD deficiency is also called Favism. This generally refers to the more severe forms. This is because the ingestion of Fava Beans (also known as Broad Beans) can trigger hemolytic attacks in patients with G6PD deficiency. Some suggest that all legumes be avoided, but whether or not this is actually needed is unknown.

Review All New Medications For Safety

Have You Ever Had Epididymal Hypertension or "Blue Balls"?