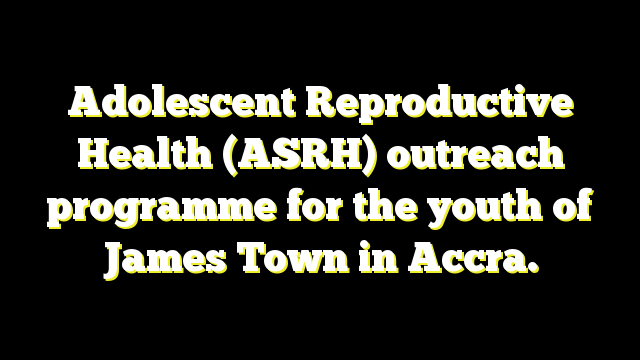 The United Nations Population Fund (UNFPA), in collaboration with the Ghana Health Service (GHS), on Tuesday, organised an Adolescent Sexual and Reproductive Health (ASRH) outreach programme for the youth of James Town in Accra.

The objective was to provide comprehensive sexuality education and services to especially, the youth, to enable them to make informed decision and choices.

Mr Niyi Ojuolape, the UNFPA Country Representative, in an address, said the area was chosen for the programme because of its peculiar challenges.

The challenges, which had to do with the high rate of teenage pregnancy, resulting from gender-based violence, rape; and also the normalcy of having unprotected sex, poverty, as well as widespread substance abuses.

He said statistics from the area, presented a very serious situation with some children below the age of 10 being sexually active, while majority of the inhabitants saw these abnormalities as normal and a part of their lives.

Data from the Ussher Polyclinic in the Ashiedu Keteke Sub-metro in Accra, shows that the facility in the first half of 2018, recorded three pregnancies from adolescents aged between ten and 14 years, same number as in 2017, compared to the single person documented in 2016.

Mr Ojuolape said the ripple effect of teenage pregnancies on the society could be catastrophic, as the country would have to be dealing with a generation of children becoming forced adults without any knowledge of how to care for themselves, let alone to provide quality parenting to their young ones.

He said it has become crucial that the issues were tackled from the source, and addressed holistically through effective education, so as to reduce the rate of maternal and child mortality and morbidity, the spread of HIV and other Sexually Transmitted Infections (STIs), improve school retention, as well as the overall quality of life of the population.

He said realising the magnitude of the challenges, the UNFPA was working in partnership with the Traditional rulers as the gatekeepers, Assembly members, youth leaders and groups, volunteers, as well as the Reproductive and Child Health Unit (RCH) of the Ussher Polyclinic at James Town to effect a change.

He encouraged the youth to visit the RCH Unit at the Ussher Polyclinic after the programme for their comprehensive sexuality education and services that addressed their needs.

Nana Oye Lithur, the former Minister of Gender, Children and Social Protection, added her voice to the call to the youth and advised them  to stay safe, and secure their lives by first abstaining from sex, but in cases where these were impossible, they must insist on the use of condoms for protection from STIs and unwanted pregnancies.

She also appealed to parents to endeavor to effectively play their parental roles by ensuring the molding of the moral, spiritual and physical characters of their children, while providing for the material needs of, especially, their female children, to save them from falling prey to sexual activities for wealth.

Dr Patrick Amo Mensah, the Medical Director of the Ussher Polyclinic said it was natural for adolescents aged 14 and above to start experiencing body changes and be drawn towards the opposite sex.

He said it was therefore important that they received the right education on the dangers and effects involved in having unprotected intercourse with a man.

He also spoke about the high rate of alcoholism as a major challenge among the youth, highlighting on how these lead to unprotected sex and unwanted pregnancies, with some abandoning their babies for their lack of preparation to become parents.

Mrs Ophelia Palm, the Principal Midwifery Officer In-Charge of the Adolescent Health Unit, Ussher Polyclinic, advised young girls to occasionally visit the Centre for sustained information on their sexuality, rather than relying on their peers for such facts.

She advised parents to befriend their children so that they would feel comfortable to share their needs and problems freely with them.