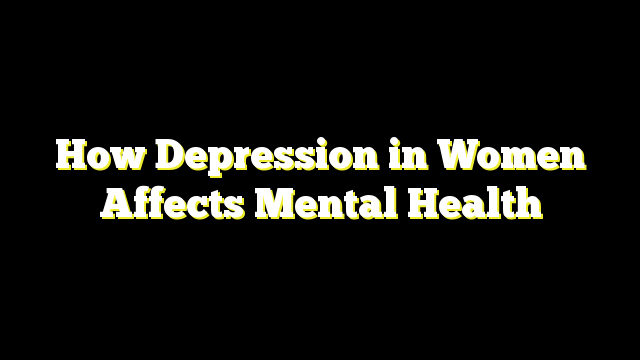 According to studies, there are more or less 17 million Americans who are suffering from depression annually. Majority of these cases are women. Persistently, it was stated that women suffer more depression than men in terms of time, duration and severity. Depression in women or in men affects their mental health and disregards some of the most important factors in their lives. With increased rates of depressive behavior in women, it may be concluded that it is because of social and biological differences.

Depression is not your ordinary blues. Being sad because of some event that happened in your life is ordinary. You mourn in a burial and that would be acceptable. After appropriate time, you’ll get over it. But, depression is another thing. It affects a person totality in terms of life, body mind and work. It drives a person to NOT do the things he or she normally do, thus affecting the facts of daily living.

Dealing with the new normal: actively help your family through the pandemic

What happens in depression?

Once a person becomes depressed, some chemicals in the brain decreases which may cause some of the nerve in the brain to work in a slower pace. Reduction of chemicals inside the brain is the cause of depression. True depression can result to a stress which may reflect on how a person manipulates his life and the people around him or her.

Aside from being depressed, women can also be the bearer of associated conditions like anxiety, stress and eating disorders. In men, they tend to have depression that can be connected with antisocial behaviors, alcoholism, OC personalities and self-centeredness.

Because of the effects of their premenstrual syndrome. When premenstrual syndrome occurs, women become depressed within the week of the actual menstrual cycle. There are about 3-5 percentage of women who experience depression due to the menstrual due to the regulation in hormones happening inside the women’s body. Women may also feel depressed because of menopause, infertility and miscarriage. Compared to men, women, especially those who are already married, tend to suffer increased depression. Older women can be at risk for danger which can lead to fractures just because of depression.

If the depression becomes severe and anxiety gets involved, it becomes more severe which may lead to PMDD or premenstrual dysphoric cycle. PMDD is a disorder that can be debilitating and requires immediate treatment.

• Sexual or physical abuse during childhood

• Contraceptives especially those that has a very high content in progesterone

• Loss of support from family, friends and loved-ones

• Mood disorders in the family

• Parent death before reaching the age of 10

In order to eliminate depression, one must know the symptoms which include: decreased in attention with the usual activities, moody, feelings of hopelessness, worthlessness, and guilt, too much or not enough sleep, weight gain or loss, constant fatigue, disturbances in behavior and thoughts of killing oneself.

The good new is, depression can somehow be treated and has an 80 percent chance of stability although, when unrecognized, depression will never find its way out of someone’s system. Some of the most common treatments for depression are hormone replacement therapy and other medications that can lessen toxins which causes depressive state. Upon recognizing that you already are being depressed and can no longer handle it, to attain mental health, you must go to your psychiatrist and ask for treatment.

What are Aerobic Exercises?

Intense! How Tough should your Aerobics Workout be?

Intense! How Tough should your Aerobics Workout be?