Nurses in Ghana: Playing Politics with Training and Employment 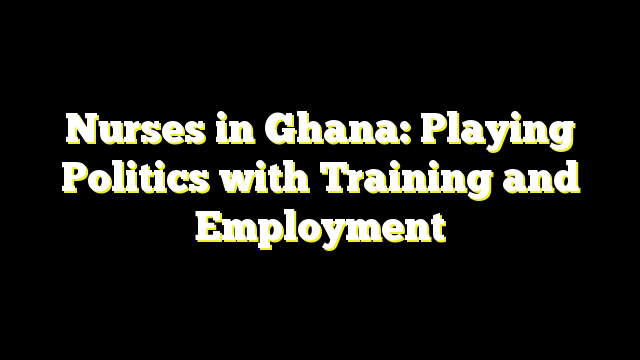 Nurses in Ghana: Playing Politics with Training and Employment

We have degree nurses; their employment is their own headache just like any other university student. The ones that were given assurance of employment, even before they entered their various institutions of learning, are the ones giving the tune for my fingers to be dancing gracefully on the keyboard today. They prefer to call themselves bonded nurses, but I call them political fertilisers. We all know that when we have a bumper harvest, we credit it to our hard work, forgetting the humble fertiliser that sacrificed its life for the plants to grow well. Just as the fertiliser is only remembered during farming seasons, so are the political fertilisers that are only regarded during election seasons.

During the 2016 elections, it was pretty sexy watching the student nurses with their kalypo in one hand, while twisting their bodies like snakes in postures that seemed to heighten their swag than the vertebrae and spinal cord lessons they were taught. These nurses could not just understand why the very allowance that baited most of them to choose the nursing training college over the university, could be taken away from them just like that. Just like the pen!s, these nurses transferred their anger to the NDC in blue balls and they suffered the most excruciating pain of defeat. Luckily, the party that gave them more assurances and promises won and took over the mantle of leadership. The expectation was that, diploma nurses were going to be pampered with goodies like the way a baby last is treated. But the sad reality is that, if Ghana Water Company could connect these nurses’ tears into their tanks, our pipes would never run dry.

Yes, it is a known secret that the nursing training allowance has been restored. It is also a public knowledge that, the twin sister of the allowance, that is the quota system, has also been restored. Sadly however, the cry of the new graduates from the various nursing training colleges is not their allowance anymore. Their cry is that, they are not being posted as their policy document demands. Their cry is that, those undertaking their mandatory national service have not been paid a penny for about five months now –let me stop underestimating, they have not been paid a penny since they started their service. Their anger is no more to the Mahama government. Their anger is that, after being trained to heal patients, they do not want to heal Ghana by enrolling in the NABCO Heal Ghana employment option. They say they disagree with the political parasites that kept this Ghana on its sick-bed despite all the vast antibodies of natural resources. They say this Ghana can die but they will not heal it. But the most sympathetic ones have already applied to heal this sick Ghana at a sympathetic monthly motivation.

The Heal Ghana is enough attestation that the country needs more nurses at the various health facilities. When the Minister for Information said the government could employ 27,000 nurses in the 2018 budget, he did not lie but only revealed the reality on the ground. The unemployed nurses were however not privy to the ulterior approach the government was going to use and therefore misunderstood the Minister. No wonder most of these unemployed graduate nurses are still anticipating they will be given financial clearance to enjoy same salaries on the payroll like their colleagues. The government will still acquire the services of the over 27,000 as communicated by the Information Minister, just that they will achieve that through NABCO Heal Ghana. We have all been praying for a smart government. Sarcastically, what is smarter than obtaining the same labour force with same competence at a cheaper cost through a program that they can still use to boast of giving jobs to Ghanaians? Until the Ghanaian youth understands that the politician that is promising them jobs and honey is also looking for same job and honey through their votes, they will never gain freedom from their miserable lives. They will tell you they are doing you a favor by employing you to give health care to the impoverished electorates, but they will never let you know you have done them a favor by employing them to take home fat salaries through your vote.

The most convulsive of the shocks is that, the pot-bellied leaders of the Nursing and Midwifery Council, who despite enjoying normal salaries have gone on multiple strikes to demand salary increment, are advising their younger colleagues to accept a meagre salary on a NABCO Heal Ghana employment scheme. The leadership of these nurses has been permeated by the political class. So you still don’t believe government has the perchance of muting conscious voices in leadership at all front by infiltrating the top hierarchy with party loyalist? The Nursing and Midwifery leadership loyalty is no more to the nurses and midwives. Their loyalty is to a certain political party and government. Whoever does not know this is either not in this country or is a member of the Jehovah Witness – the only group with little or no knowledge in the politics of this country.

The secret and most worrying fact is that, the over 30,000 nurses do not know their power. They simply do not know they can drown the voice of their corrupted leadership. They do not know they can continually ignite public discussion about their fate through nationwide demos and press conferences. They simply do not know they can keep the media talking about them. They do not know when they are crying in their hideouts, the politicians do not care. They do not know the politicians hate being talked about negatively in the media. The reality is that, Ghanaians know you are employed because our Minister told us so in the 2018 budget. If you are not employed, then you have to come out in your numbers and tell Ghanaians you are not employed as stated by the government gongo beater. The bonded nurses are not like any other graduate. They have been assured legally of their employment before they took the nursing training program. Their case is therefore special and that is why they ought to resist government’s attempt of adding them to other graduates and enrolling them on NABCO. NABCO is good for those of us who were brazen enough to ignore the juicy employment assurance at the Colleges and enroll in the University –I’m not by this saying the university student does not deserve better employment.

Anyway, what is my business not minding my own business? I am a university student, and government does not owe me employment. But why should I not empathise with my bonded nurse friends who divert every conversation to their fate?Being a friend to these nurses is even becoming boring ‘koraa’. They are even fertiliser nurses waiting to nourish the 2020 election for another political party to have a bumper harvest of votes, and I am also here wasting my time writing plenty. I bore ‘sef’. Full stop.

The writer is a 5th year Doctor of Optometry student at the University of Cape Coast.