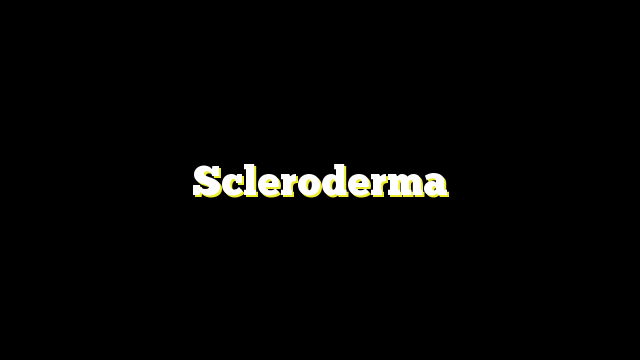 Dealing with the new normal: actively help your family through the pandemic

A rare problem called Scleroderma is a chronic disease that is known by the excessive deposit of collagen. It is going to affect at least 300,000 people in the U.S. Scleroderma is four times as common in women than it is in men. Having progressive systemic scleroderma is known as systemic sclerosis and it is a common type of disease and can be fatal.
Scleroderma will mostly affect the skin and it is most known to have hardening skin and associated scarring. This will give a reddish or scaly appearance. There are blood vessels that may also tend to be more visible. There is fat and muscle wastage that will weaken the limbs and affect their appearance when there is a larger area affected. In most of the serious cases, scleroderma can affect the blood vessels.
It is serious because scleroderma goes between two cases. The most important things to know are to consider the level of internal attachment that is occurring under the skin and the total area that is covered by the disease. A person may have only one or two affected areas or lesions or they may have many larger ones. Many people that suffer from scleroderma have Raynaud’s phenomenon and this is an arthritic vascular symptom that can affect the fingers and toes. The hands and the feel may have discoloration because of the cold. Raynaud’s phenomenon and systemic scleroderma can be the cause of painful ulcers on the fingers and toes too. Calcinosis is the deposits of calcium around the joints and it is common for the sufferers of systemic scleroderma and can often be found near the elbows, knees or other joints.
There are three major types of scleroderma. They are diffuse, limited and morphea sometimes called linear. The first type diffuse scleroderma is a systemic disease. It is the most severe form. It is known by the fast onset a will involve more skin hardening. Diffuse scleroderma will cause severe internal organ damage to the lungs and gastrointestinal tract. It is more life threatening.
The second kind, limited scleroderma is known as CREST syndrome. CREST is an acronym that stands for Calcinosis that is known as Raynaud’s Syndrome. Esophageal dysmotility Sclerodactyly and Telangiectasia are the five major symptoms of limited scleroderma. CREST is a systemic disease and is much milder. It has a slow process. The skin hardening is usually just on the face and hands and internal organ process is less severe. The prognosis is much better for limited scleroderma.
There is no cure for this disease but there is treatment for some of the symptoms. These treatments will mean drugs that soften the skin and reduce the swelling. Having heat exposure will also help most of the patients. You need to speak to your doctor about more information on this case.

Loved Ones can help in Dual Diagnosis

A Simple Guide To Hypnosis

A Simple Guide To Hypnosis