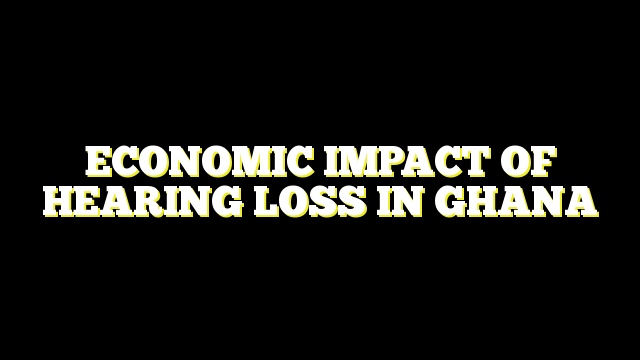 Currently in Ghana the cost of one hearing aid is between Ghc4000 – Ghc 6000 which means if you have Hearing Loss in one ear you are actually looking at the region of GHC 4000. Maintenance ( batteries, regular cleaning schedules, scheduled audiological assessment etc) not included.

Now Ghana is a middle income and a developing country let ask ourselves this question:

CAN THE ORDINARY GHANAIAN AFFORD ONE HEARING AID AND KEEP UP WITH MAINTENANCE?

The most recent study reported the prevalence of Hearing Impairment (HI) to be about 6.8% (Wilson et al, 2017). HI is more prevalent in South Asia, Asia Pacific, and sub-Saharan Africa than the other parts of the world.
In Africa, 6.8 million (1.9%) people are living with hearing loss defects (WHO, 2014), with environmental factors reported as the predominant cause of the disorder (Amedofu et al., 2006).

In January, 1999, a prevalence study was carried out in a Ghanaian village called Adamarobe that was known to have a number of Hearing Impairment (HI) citizens. The results of the study stated that a total of 45 deaf people were identified in 14 families based on their physical examination and family history (Amedofu et al., 1999).
The incidence of hearing impairment in this village was calculated as 23.7 per 1000 when a better ear hearing level of >25 dB was used (Amedofu et al., 1999).

Other studies in Ghana since Adamarobe findings:

A report from Komfo Anokye Teaching hospital (KATH) stated that there is an overall increase in the number of patients (from 3.7% to 15.5%) with hearing loss who visited the hospital between 1999 and 2004 (Amedofu et al, 2006).
According to the researchers, the increased number of hearing impaired patients was due to awareness about the Hearing Assessment Center in Kumasi (Amedofu et al., 2006).
Awuah and his coworkers in the year 2006 screened 268 patients suffering from different forms of ENT disease, who visited the KATH. They enrolled 188 patients of whom 51 were diagnosed of acute otitis media (AOM). The prevalence of HI among the AOM patients was calculated as 91.3%; thus 37 out of the 51 patients were further diagnosed of HI (Awuah et al., 2012).