Getting Pregnant After Stopping Birth Control 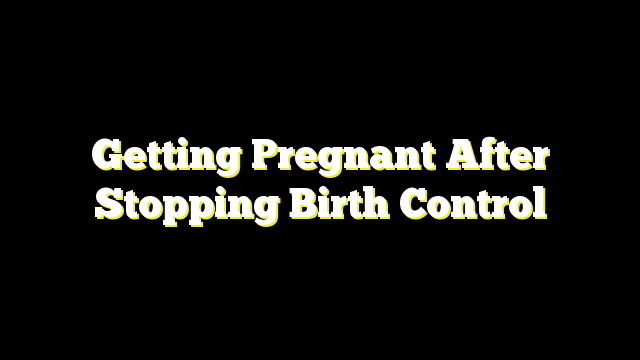 Getting Pregnant After Stopping Birth Control

Most forms of birth control and their effects are temporary and reversible. This article provides information on how the common forms of contraceptive like barrier methods, spermicides, pills, and birth control shots work. It also discusses how soon a woman can get pregnant after stopping birth control.
Effective methods of birth control may be the best thing to happen to women in history aside from getting the rights to vote and being elected to public office. Birth control provided women with the power of choice when it comes to having a baby. Although initial reactions to birth control included worries about not being able to get pregnant later on, studies show that contraceptives do not impact fertility negatively. Depending on the contraception method used, women can conceive anywhere from a day to year after stopping birth control.

Depression And Pregnancy: A Mother And Child’s Life Compromised

Using barrier methods like condoms, sponges, diaphragms, and cervical caps, among others does not affect a woman’s ability to conceive. These methods only prevent sperm cells from reaching the egg and fertilizing it. Barrier methods do not alter or affect a woman’s hormonal cycle and ovulation process. Provided that a woman has a normal ovulation and fertility cycle and that she relies solely on barrier methods for birth control, there is no reason she could not get pregnant after having sexual intercourse without using barrier methods. If a woman cannot get pregnant after stopping the use of barrier methods, she and her partner must submit themselves to a proper medical checkup to assess their sexual and reproductive health.

The use of spermicides in cream and gel forms does not affect a woman’s ability to conceive. Usually used with a barrier method or applied directly to the genitalia as a form of lubricant, these gels and creams prevent sperm cells from fertilizing the egg by killing them at the moment of ejaculation. Similar to stopping the use of barrier methods, there is no lag time when it comes to being able to get pregnant.

Using pills or BCP as a form of birth control is a popular choice among women for its convenience and reliability. However, stopping BCP to get pregnant can be a little tricky if done incorrectly. It is generally advised that women should finish their current pill pack before stopping instead of discontinuing the intake abruptly. Since it takes months to get pill-contained hormones out the body’s system and for a woman’s cycle to normalize without them, it usually takes an average of eight months to a year after stopping pill intake for a woman to get pregnant.

Getting pregnant after stopping an injectable form of birth control like Depo-Provera may take longer when compared to barrier methods and birth control pills. Since the effect of a shot lasts for three months, a woman hasn’t really stopped the birth control until after the third month of her last shot. Even then, getting pregnant can be difficult and may take anywhere from ten to 18 months after taking the last shot.

How To Choose a Gym for Aerobic Exercise

How To Choose a Gym for Aerobic Exercise