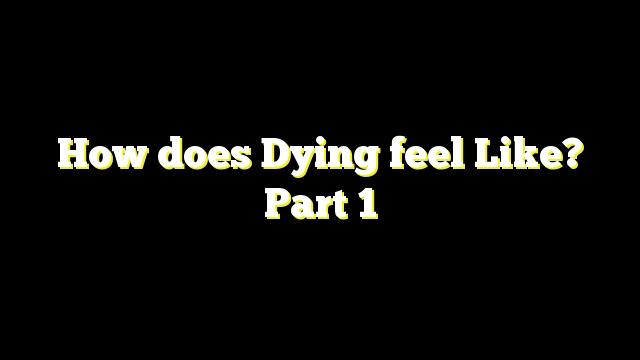 The living have always feared dying and quite so because no onr can really tell what’s beyond taking a last breathe. However, some people have had the opportunity to have near-death experiences and share their stories. There’s no need to try and find out for yourself because you may not come back to tell your story. Just read and speculate 😁

“I went into a hospital for an easy procedure, basically an upper GI where the doctor had to expand my esophagus. I had developed a stricture above my stomach and couldn’t swallow properly. For this procedure, I was to be put into “twilight sleep.”

While under, the doctor said that it was going to be harder than he had thought. So they decided to put me all the way under. While I was out, he was aggressive with the expansion. When I woke up, he was there telling me that they were going to keep me overnight for observation because I may still be bleeding.

While I was in the recovery room waiting for a real room, I had to get up to go to the bathroom, and I nearly passed out. I felt dizzy, cold, sick. They checked my blood sugar. Didn’t put two and two together – hey, she’s in here for internal bleeding…she could be bleeding… They didn’t know why I had gotten sick, and ignored me. I must have been lying. But anyway, finally, I got a room.

The next day, I was getting sicker and sicker, more and more tired. They wouldn’t let me eat because I had just had work on my stomach, so I figured I was weak from hunger. They assumed the same. Every time I went to the bathroom I was near passing out. I almost crawled once but didn’t want to hurt my knees. I was barely hanging on. And, let’s just say there was evidence of my internal bleeding in the toilet. Did the nurses give a crap? Of course not. They were testing my blood every couple of hours, and I found out much later, that my hgb and other blood levels were dropping. No one cared. They got mad at me for asking for help getting to the bathroom.

The NEXT day, they decided to take me in for an xray and ct scan to see if I was indeed bleeding. I could not sit up in the wheelchair. I had to slump over the side. I wasn’t trying to be dramatic. I was too sick for that! I couldn’t even sit up. Nurse: “Are you always this white?”
Me: “No.” (I couldn’t say anything else)
Nurse: “Lovely day, isn’t it?”

While in Xray, they wanted me to stand next to this upright table, and then later they would be somehow lying me down as the table descended or something, but as soon as I stood up, I passed out.

Next thing I know, I’m hearing the xray tech guy yelling at me to breathe. Well, I didn’t really care to breathe. I had no desire to. But I tried anyway because he was so anxious about it. I couldn’t of course. I didn’t feel like I had a body. I wasn’t in pain, I wasn’t sick anymore (all new experiences for me, as I’ve been sick and in pain for almost 30 years now), I felt great. I didn’t really want to breathe. Apathy – that’s a good word for it. I didn’t care. I couldn’t feel, I couldn’t see, I could only hear. That was my only sense. I’m not sure how much time went by, when I realized he was sort of juggling my head around, and it was annoying. I wanted him to stop, but I still didn’t want or care to breathe. He finally stopped and said to call Rapid Response, or whatever they’re called. I heard alarms and announcements and stuff, and a bunch of people came running in.

At that point, blood came pouring out of me, all over the metal table. I was so embarrassed. I tried really, really hard and was finally able to speak. I apologized to them, my speech slurred. I couldn’t open my eyes yet. I couldn’t move. The rapid response people stuck around but they had determined that I was alive, I guess, and didn’t do cpr or anything. I slowly woke up and was able to open my eyes again, and move, a little. They were juggling me around, cleaning me up, but I couldn’t do anything but lie there.

THEN, the mean, a-hole xray tech was talking to a nurse and he said, “She didn’t pass out!” WTF, MAN?? What was all this juggling my head and telling me to breathe and crap? I overheard him say this thing about me not passing out, and I told the nurse next to me, “I did so pass out.” She asked how I knew. I said because I had no idea how I got from standing up over there to lying down over here. She glared at the xray tech and he shut his a-hole mouth. Jerk.

Finally, they were convinced I was bleeding internally and gave me a freaking blood transfusion. Come to find out later, my hgb was 5.1. At 5, organs start to shut down. I was so SO so mad at them for ignoring my symptoms and all the signs for 2 days. I was either dead or extremely close to being dead.

I wrote the hospital a 6 page letter with a timeline of everything that happened and got an apology, but big deal. How many people have to die in their care before they start giving a crap and listening to their patients?

As for me, being too sick to speak up for myself, all I could do was sleep. It’s not like I was a cranky patient or anything. I was trying so hard to be nice so they wouldn’t treat me like crap, but they treated me like crap anyway. I didn’t want to be a bad patient, one of those people my SIL nurse complains about. But all that got me was dead or near dead.

Moral of the story: Speak up, or get somebody to speak up for you, or DIE. “(By Kristie Snively)