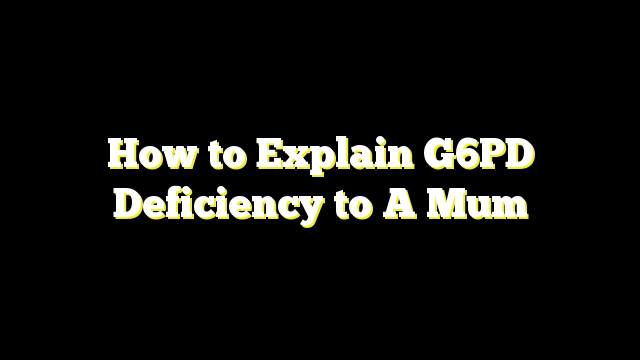 Glucose-6-phosphate dehydrogenase deficiency, or G6PD deficiency for short, is the most common “inborn metabolic disorder” in the world. This means that from the time a baby is born, there is already something wrong with how his body makes and breaks important substances. According to statistics, about 400 million people have G6PD deficiency, and it is most common in Africa, Southeast Asia and the Middle East.

Babies with G6PD deficiency have very little or no enzyme called Glucose-6-Phosphate Dehydrogenase (G6PD). An enzyme is a kind of protein that speeds up chemical reactions in the body. The enzyme G6PD is especially important to red blood cells. If this enzyme is lacking or missing, red blood cells are easily destroyed.

Another name for G6PD deficiency is favism because some people who have it, usually those living in the Meditteranean region, react very badly to fava beans

In order to understand what causes G6PD deficiency, one must first learn a bit about genes and chromosomes.

Genes are like the body’s blueprints. They contain instructions on how specific parts of the body are made. For example, if the instructions in your hair genes say your hair is black, your hair will be black. Genes are packaged into threadlike structures called chromosomes. A chromosome is very much like a beaded bracelet. The beads are the different genes that give instructions for different part of the body; the entire bracelet is the chromosome. Genes usually come and act in pairs. One member of a specific pair comes from the father, and the other member comes from the mother. The members of a pair are located on paired chromosomes.

There are 2 kinds of sex chromosomes, X and Y. All baby girls have two X chromosomes. All baby boys have one X and one Y. The gene that gives instructions on how G6PD is made is found in the X chromosome only, thus G6PD deficiency is described as X-linked.

A defective G6PD gene will give wrong instructions on how to make the enzyme G6PD. As a result, too little or none of it is made.

What are the harmful effects of G6PD deficiency?

G6PD has a very small but strategic role in protecting the body from substances that can cause damage to cells or oxidative substances. Because of this important role, G6PD is normally found in all parts of the body. To be sure, most parts of the body also keep a “spare” enzyme, one that can do the work of G6PD in case it is lacking or missing entirely. Unfortunately, this is not the case with red blood cells. They do not have spare enzymes that can do the work of G6PD. If a baby does not have enough G6PD, his red blood cells lack protection from the harmful effects of oxidative substances.

A baby with G6PD deficiency appears and remains healthy until he is exposed to a large amount of oxidative substances. When this happens, his red blood cells are destroyed, a process known as hemolysis.

Red blood cells carry oxygen to all parts of the body. When they undergo hemolysis, the baby will have hemolytic anemia. The signs and symptoms of hemolytic anemia are paleness, dizziness, headache, tea-colored urine, and abdominal or back pain or both. Hemolytic anemia, when very severe, can end in death. Destroyed red blood cells are brought to the liver to be broken down to smaller pieces for disposal. One of the end products of this process is bilirubin, a yellowish substance that accumulates in different parts of the body when too much of it is produced. Quite often, bilirubin accumulates in the skin and causes it to appear yellowish. In the worst cases, biliribin accumulates in the brain and causes mental retardation or death.

Where do oxidative substances come from?

Most drugs with strong oxidative effects are of kinds:

1. antibiotics of the sulfa group

3. some medicines for fever

How is G6PD deficiency treated?

When a child has taken oxidative substances and suddenly shows the signs and symptoms of hemolytic anemia, he is said to have a hemolytic crisis. During such crisis, the goal of doctors and nurses is to prevent the harmful effects from getting worse. Blood transfusion, oxygen, and folic acid may be given.

The ultimate treatment for G6PD deficiency is gene therapy (replacing a defective gene with a good one), but this is not yet available at the present time.

As parent, what should I do to prevent a hemolytic crisis?

1. Tell your child’s pediatrician that your child has G6PD deficiency. This is very important so that he will not prescribe oxidative drugs in case your child gets ill. He would also be able to watch out for hemolytic crisis and would immediately know what to do just in case it happens.

2. Keep your list of oxidative substances in a handy place. Better yet, post it in a convenient spot on the kitchen wall. Always double-check food, beverage, and medicine labels against the list.

3. Memorize the signs and symptoms of hemolytic anemia: paleness, dizziness, headache, difficulty in breathing, rapid and strong heartbeats, tea-colored urine, and abdominal or back pain. Bring your child to his pediatrician as soon as these signs and symptoms appear.

4. Do not ignore infections. Persistent fever signals an infection. Bring the child at once to his pediatrician.

5. As your child gets older, honestly and gently tell him about his condition and teach him to be careful about what he eats.

1. If you have coughs, cold or other bacterial or viral infections, make sure to inform your doctor that your have G6PD.

2. If you have ingested or were exposed to any medication and your urine became tea-colred inform your doctor immediately.

3. If you have yellowish discoloration of your skin, sclera or any part of your body, consult your doctor immediately.

4. Avoid the following foods that are contraindicated among G6PD deficient individuals:

5. Avoid ingestion of or exposure to the following drugs and chemicals:

What Are the Causes and Predisposing Factor for Osteoarthritis?