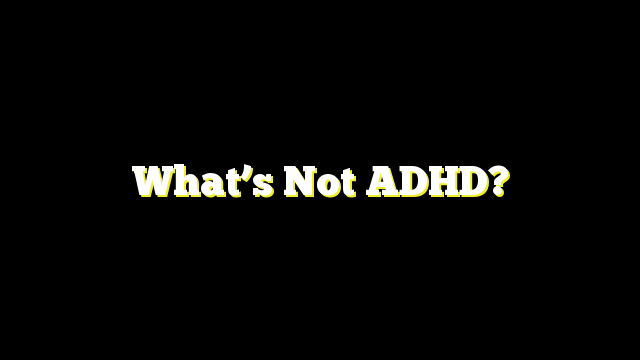 Let’s look at five behavioral issues which are not ADHD (Attention Deficit Hyperactive Disorder). While these difficulties may be found along with ADHD, it doesn’t mean that they are symptoms of ADHD.

The five problems we’ll discuss are Anxiety, Depression, Disruptive Behavior, Learning Disabilities, and Sensory Integration Disorder. Please believe me – I don’t want to make your life more complicated! Yet if we wish to approach treatment and outcomes with a degree of scientific objectivity, an accurate understanding of a child’s behavior is essential. Unfortunately, we live in a time when all kinds of behavioral problems are herded under the umbrella of ADHD. But what if some attention problems have a different foundation, and what if psychostimulant medication isn’t always the best response to behavioral problems – even those that appear to involve hyperactivity?

5 Tips to Combat With ADHD

1. Anxiety is a problem that may easily affect attention because a child can be preoccupied with internal thoughts or worries. As a consequence, he or she may appear to be zoning out. An important question to consider is whether your child is equally distracted when he or she is relaxed. If not, situational factors may be triggering anxiety and inattention. Sometimes children who do not know how to handle a worrisome situation, or who have difficulty expressing their feelings, “clam up.” Don’t you have a harder time concentrating on work if you’re nervous or worried about a personal situation? It can be much more difficult for a child to articulate his or her worries. A concern that seems trivial to adults can also cause great anxiety for a child, as well. For example, a preschool boy was very worried in school until it was discovered that he was having trouble handling his buckles and snaps at the bathroom break but was afraid to ask for help; a 7th grade girl couldn’t focus in her Language Arts class because she was seated next to a girl who had mocked her in gym.

Depression is a mood disorder which can impair executive thinking skills like working memory, cognitive flexibility, planning, and attention.

2. Depression turns our mind’s idle down, and as a result we can appear “out of it” – but the cause is not ADHD. Irritability, lack of initiation or interest, and inattention may be symptoms of depression or ADHD. Of course, most children can’t describe exactly what they feel, or whether a mood problem or poor focus came first. In such cases, it is critical to evaluate a child’s behavior in multiple contexts, and to determine if an improvement in mood helps focus. (Some dual-action antidepressants such as Effexor (TM), which effect norepinephrine, enhance executive thinking skills much better than other antidepressants. Please consult your doctor about possible advantages of dual-action antidepressants for children with both a low mood and executive dysfunction).

3. Disruptive Behavior is an especially prevalent problem in school. Some kids just won’t settle down and are a significant learning liability for other students. Sometimes, disruptive behavior is mistaken for hyperactivity. Indeed, hyperactivity may lead to disruptive behavior, but they are not the same thing. All kinds of kids can be disruptive, sometimes intentionally. A hyperactive child has trouble slowing down, even though he may wish to. An intentionally disruptive child may be feeling frustrated by classroom expectations, rebelling against authority, developing self-control at a slower rate than peers, or seeking attention. If a child is invested in gaining attention through mischief, loudness, or intrusion, a medicine such as Ritalin (TM) is not likely the best course of treatment.

4. Learning Disabilities may affect one or more subject areas, as well as social interaction. It stands to reason that if a child has a learning problem, in reading for example, he or she will be less attentive to that aspect of instruction. A learning disability can certainly be exacerbated by ADHD, but ADHD itself is better understood more as a learning liability than something like dyslexia – a specific learning disability.

5. Sensory Integration Disorder (SID) is a problem with either being oversensitive or undersensitive to sensory stimuli. These problems can make a child appear either hyperactive or inattentive. This disorder is often confused with ADHD, especially in preschool children whose sensory integration difficulties undermine “self-control.” A child with a sensory integration disorder may be distressed by loud noises, bright lights, rough textures, or smells; or conversely, may need to handle things, hang upside-down, or shout boisterously. For an excellent discussion of Sensory Integration Disorder, read Carol Stock Kranowitz’s book, The Out-of Sync Child.

Each of the disorders described above could potentially be found along with ADHD, in which case both disorders need to be treated. Without question, ADHD is major health epidemic facing children. The Center for Disease Control and the World Health Organization have both affirmed this fact. In the midst of managing this crisis, we’ve got to work hard to resist “one size fits all” thinking. Let’s make sure children’s behavior is carefully evaluated and understood within a social and emotional context. If we were the person being treated, we wouldn’t expect or accept anything less!