Why You Are Allergic And Others Are Not 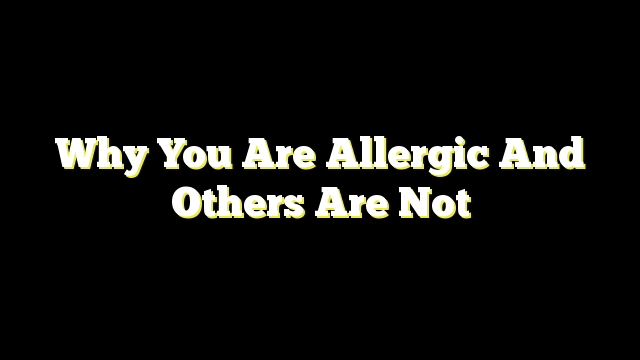 Why You Are Allergic And Others Are Not

The thing is, our bodies react differently to allergens. While it is true that allergy-inducing components are present in the air we breathe, the food we eat and the water we drink in varying quantities, our bodies can somehow fight them or get defeated by them. It is basically a war between the immune system and the nasty foreign substances we dearly call “allergens”.

What Not To Do If You Have Dog Allergy

Treat Your Itchy and Irritated Eyes With These Easy Herbal Remedies

The difference lies in the reaction of the immune system. Normally, allergens such as pollens, food and dust are very well tolerated by our bodies. The body treats them as common substances that do not pose any harm to the system. However, for some people with so-called allergic reactions, their bodies react defensively, oftentimes producing symptoms that are identified as allergic reactions.

This is where things mess up because by nature, the body should be tolerable enough to come in contact with the so-called allergens without putting up a fight. By the way, allergens are certain types of antigens which are basically foreign substances that upset the homeostasis of the immune system.

For normal people with normal reactions to allergens, the immune system produces antibodies that are meant to combat with the foreign materials. These antibodies are, in a way, protectors of the body in protein form. They are medically known as immunoglobulins. They work by attaching themselves to the surface of the invading materials such that other immune system cells can easily destroy the allergens. There are five immunoglobulins that are found in human body namely IgA, IgD, IgG, IgM and IgE. The latter is the allergic reaction-producing immunoglobulin.

However, the case is different for those people with allergic reactions for they develop the allergy antibody called IgE in abnormally high quantities. This either develops on the first exposure or it can sensitize for several years and will only arise on succeeding exposures.

For both conditions, it is possible that there is prior exposure to allergens that have triggered the development of the IgE antibody in higher quantities. Once this happens, the immune system would produce much higher numbers of IgE which would turn out to coat immune cells that contain certain chemicals that might cause various body reactions during their explosion.

When these chemicals are released, which include histamine, inflammation in specific sites of the body would occur, the typical symptom of allergy. This is the result of the body’s exaggerated reaction to various substances. On subsequent exposures to allergens, the body will react in the same exaggerated manner. In fact, the body may become more reactive. The result is an allergic individual who cannot put up with otherwise harmful substances.

The importance of the IgE makes sense if seen from its original, and not the altered, function. IgE are meant to protect the human body from the invasion of parasites and not normal substances such as dust, dander and mites.

Thus, reactive responses to allergens are not normal and should be treated as such.

How Serious Food Allergies Can Become?

How Serious Food Allergies Can Become?