Family Planning Methods For Everyone 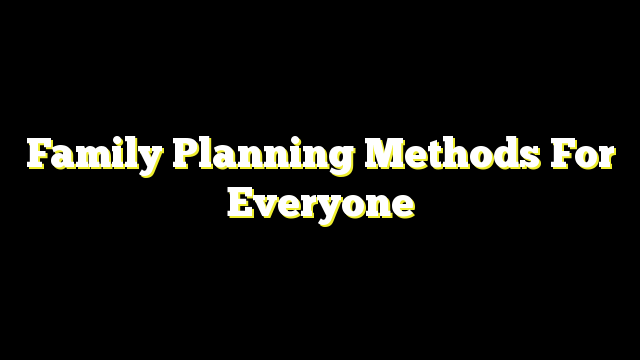 Family Planning Methods For Everyone

Family Planning methods were created to solve the problem countless families are encountering. Family planning is a method of spacing your children. Birth control methods also allow people to have the maximum number of children they can provide for.

The responsibility of family planning is not just in the hands married couples but also young people. Birth control methods and options should be known to them to prevent teenage pregnancy.

Effectiveness of Family Planning to Consider

How many of us have dreamed of their perfect family? A lot of newly weds often say that they want a huge family with a lot of children. But as reality sinks in and gives them a wake up call they slowly realize that it is not always the more the merrier. The truth is most of the time it’s the more the uglier, because of today’s rapidly growing population jobs are becoming scarcer, urban areas are becoming smaller and more crowded and the world is running out of resources to meet the needs of the growing population of man.

It may have been said in the early years of the earth that we should go forth and multiply but up to what extent was not really discussed. Since that time people have not been looking into the adverse effect of a huge population and a small planet.

No one has even noticed that there are options for Birth control methods that are ready for them to use.

To solve this problem countless ways have been invented and promoted to encourage people to plan their family. Family planning is the method of spacing your children over a period of time to prevent yourself from having a hard time raising them.

For some people the main concern that they have is the age gap of the children but the number of children they have. Even if you are a hard worker if you have twenty mouths to feed it will drive you nuts just as having one child in the family and also having no job. It’s a nightmare for some people to raise their family because there’s just too many to take care of.

The age and number of the children largely out numbers that of the disposable income of the household.

It is sad when you think about how it could’ve been prevented by simple family planning. Some people are afraid to understand family planning because there had been no real attempts to study how it works and for who it works for. Some people remain ignorant to the fact just can’t say no. The responsibility of family planning not only falls into the hands of couples in marriage but also young people who engage in pre-marital sexual acts.

Birth control methods and options should be known to them to prevent teenage pregnancy.

Birth control should be more than just something that we use to prevent pregnancy.

It should also be a responsibility that we are willing to carry on until we retire and we should take part in educating children about the importance of proper spacing.

What is Paget’s disease