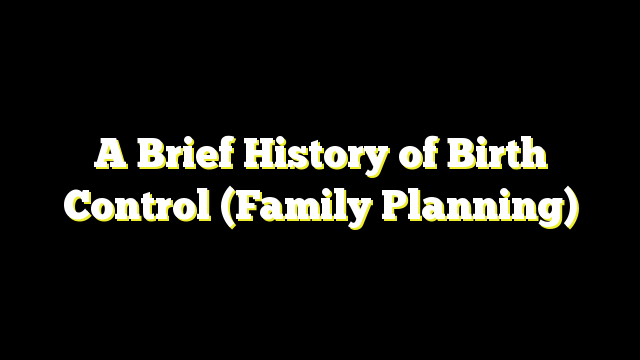 Here’s a brief look at the history of family planning. Although pills are very much in demand to avoid getting pregnant for women, these are also causing quite a stir.

The reason for this is because birth control pills are known for one side effect. More and more women are complaining that the pills cause them to gain weight. For the ladies who use the pill just to avoid the risk of pregnancy, this is definitely not a good news.

Effectiveness of Family Planning to Consider

When a woman gains weight because of the pills, it causes her to look at the other options. But not everybody is affected of this kind of side effect. Some women don’t have weight issues regarding the use of birth control pills.

But for the women who are prone to such effect, there are other forms of birth control that they can choose to use. They can go the natural way or the rhythm method. This is where the partners will become involved in a sexual act only when the female is not fertile.

There are methods that are being injected and inserted to the women’s genitals to obtain same effect as the pills. And among the popular ones is through the use of condoms. Nowadays, both men and women have condoms suited for their private parts.

The History
The oldest form of birth control can be the sexual abstinence. But aside from it, the withdrawal effect can also be considered as one.

Coined as the coitus interruptus, this means that the penis of a man will withdraw from the woman’s genitals before the ejaculation. This prevents him from transmitting into the lady or his partner any vital sperm that may cause pregnancy. But this requires a lot of self control on the part of men.

It was also believed that Egyptian women have used suppository for their vaginas on old ages. The term for this type is pessary. This contains oil and other lubricants that will kill the sperm once the woman becomes involved in a sexual act.

The equivalent of today’s female condoms at the time is a cervical cap for Asian women. This is like oiled paper. And for the same goal, Europeans have used beeswax. It was not until the 17th century that a condom was invented. When it was first introduced, it wasn’t as popular as today. And it was intended not only to avoid the risk of pregnancy but also to avoid acquiring sexually transmitted disease like syphilis.

Throughout human history,there are various abortifacients that have been used. But the effects vary and those that were proven effective caused a lot of side effects. In the developing years, the herbal medium was used to act as a contraceptive.

The 20th century introduced the rhythm method or the natural way. It is still being applied today and can be as effective as the birth control pills but will also require a lot of control from both concerning partners.

In 1960, the FDA approved the pill that is now known as birth control. It was in 1972 that the pill became available for married ladies and singles ones who are over the age of 21. This was part of the 26th Amendment.

This brief history of birth control shows you its popularity through time. Although, it is also known to cause added weight, people rely on one or two types in hopes of not risking getting their partners pregnant at the time that they are still not ready for it.

How To Conquer Addiction With Hypnosis