Attractive Packages for Doctors who Accept Posting to 3 Northern Regions? 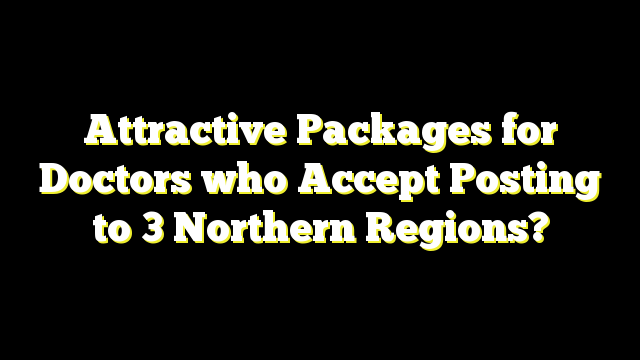 Attractive Packages for Doctors who Accept Posting to 3 Northern Regions?

The Ghana Health Service (GHS) is to roll out a comprehensive programme by March 2019 to encourage doctors and other health professionals to accept posting to the three regions of the north.
Over the years, few doctors have chosen to work in the Northern, Upper East and Upper West regions because of a multiplicity of reasons.

In that regard, the GHS Council is setting up a committee to come up with workable solutions to the challenge.

Home training that challenges you

The Chairman of the council, Dr Yao Yeboah, stated this during a tour by the council members to the Upper East Regional Hospital in Bolgatanga as part of a two-day working visit to the region.

The visit enabled the members of the council to acquaint themselves with the challenges facing the health sector in the region, with a view to devising strategies to address them.

It also enabled them to document best practices in some of the health institutions, with the aim of sharing them with other institutions in the country.

According to the Council Chairman, efforts would be made to address the problem of accommodation, which is one of the major reasons some health professionals were unwilling to work in the north.

Dr Yeboah further indicated that more incentive packages would be put in place to encourage health professionals to accept to work in those regions.

He said the regional hospital had only seven doctors, a number which was inadequate for a hospital of that status.

He said the low number of doctors at the hospital was not the best, hence “we need to change that situation”.

According to the chairman, increasing the number of doctors at the hospital had become imperative because of the expansion being undertaken at the facility, the only referral centre in the region.

The Medical Director of the Upper East Regional Hospital, Dr Patrick Atobrah, said the fact that seven doctors, including two Cubans and one specialist, were working in a  220-bed capacity hospital was a matter that needed attention.

He said due to the inadequate number of doctors, the hospital was sponsoring four health personnel to pursue specialist programmes in medicine.

According to him, work on an additional 177-bed structure to help expand the regional hospital had been abandoned for the past one year and underscored the need for the government to reactivate and complete the project.

The Director General of the GHS, Dr Nsiah-Asare, cautioned the hospital staff against the use of phones to engage in mobile money transfers and illegal procurement, which could dwindle the fortunes of the hospital.

He indicated that as a measure to curb the illegalities, the GHS would be compelled to send “mystery clients” to hospitals to help expose health personnel who engaged in those acts.