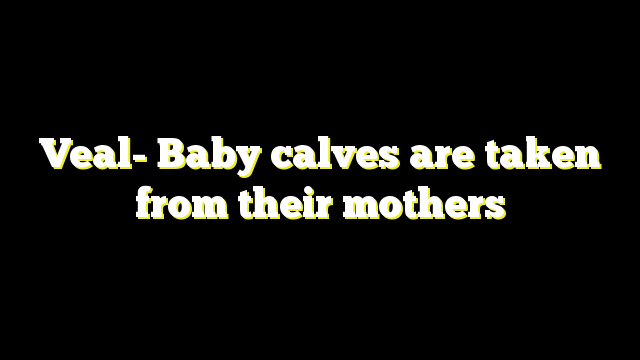 There are few issues that make a more compelling argument for a vegetarian diet than that of veal and how it’s produced. While the meat industry is, by its very nature cruel and inhumane, the veal industry is the worst.

Baby calves are taken from their mothers, often at just one day old. They’re kept in pens that prevent movement, to keep their muscles soft. To produce the pale, soft veal that is so highly prized by gourmets, the calves are fed a liquid that’s deficient in iron and fiber that creates an anemia in the animal.

Remembering the Reasons for a Vegetarian Christmas

Should You Be Worried About Peanut Allergy

Did You Know That Humans did not always eat meat?

The confinement in which they live for their short lives creates a significant level of chronic stress for the animal and they’re subsequently given much higher levels of medications that can be harmful to humans. The confinement makes them weak, often unable to stand. We treat criminals who have committed the most vicious crimes imaginable more humanely than we treat innocent calves.

Why would anyone want to consume meat that’s delivered to the table infused with the suffering of animals? What culinary experience can ever be worth it when you know what the animal, especially a calf, has to go through?

At age 20 weeks, the calf is then slaughtered. All the meat we eat has been mass produced and slaughtered. Their life is inhumane and their death is inhumane, in addition to which it’s becoming less and less healthy for us to eat. Veal is the premier example of this industry. Changing to a vegetarian diet not only is a much more healthy way to eat, it’s way of living in balance with the earth. It may have been one thing centuries ago to hunt for meat because it was a means for survival. Today’s mass-produced meat industry is nothing like that and is more a cause of illness and poor health than it is for survival or nutrition.