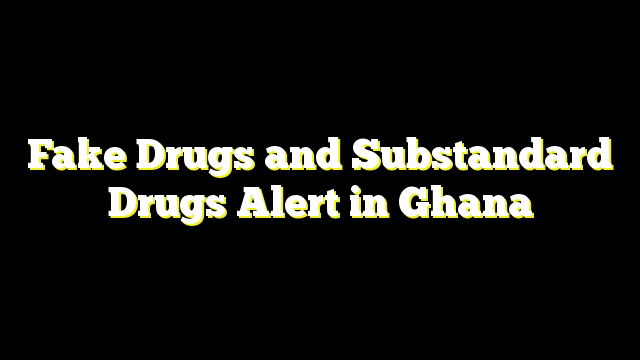 Following information gathered from the recently ended Annual General Meeting (AGM) of the Pharmaceutical Society of Ghana (PSG) it came out that drugs and hospital consumables in the Ghanaian market have poor quality.

These products and more do not seem to work or have gained microbial resistance. This situation is a serious contributory factor to the high rate of morbidity and mortality in the country, especially in the case of antibiotics.

In 2009, the World Health Organization (WHO) defined ‘substandard’ drugs as “out of specification”, these are authorized medical products that fail to meet either their quality standards or specifications, or both. We aim to raise awareness of the problem of substandard drugs; a problem that we regard as having the potential to be a public-health crisis.

Poor-quality medicines present a serious public health problem, particularly in emerging economies and developing countries, and may have a significant impact on the national clinical and economic burden.

Substandard medicines are widespread and represent a threat to health because they can inadvertently lead to healthcare failures, such as antibiotic resistance and the spread of disease within a community, as well as death or additional illness in individuals

Dr. Richard Akintoyin of Department of Medicine, University of Ilorin Teaching Hospital (UITH) Nigeria, has alerted the public of the circulation of ineffective and substandard anti-snake venoms in the country. Akintoyin made the warnings in Ilorin during his research paper presentation entitled: “Severe Snakebite Envenomation: A near fatal case of portable anti-venom innefficacy”

The serious danger lies with the emergency drugs like oxytocin which is now awarded a procurement price of 0.21peswas which is going to open the gate for the most inferior brands to flood our public health institutions. This can defeat the quest to satisfy the sdg 3 which seeks to reduce maternal mortality.

In 2012, the United States Promoting the Quality of Medicines (PQM) program worked in conjunction with the Ghana Food & Drugs Authority (FDA) to sample and assess the quality of some key maternal health products (uterotonics) across all the 10 regions of Ghana. Samples were picked up from all the major categories of dispensing points, such as private clinics, public polyclicinics, pharmacies, drug stores, medical depots, among others.

It was found that less than one-tenth of the oxytocin (an important maternal health product used to reduce harmful bleeding in women after child-birth) on the market was on sale legally. For some of the products it was not even possible to find out their origin.

ALL the ergometrine tablets that were sampled failed to pass the basic tests for quality. Nearly all the oxytocin products sampled were also shown to have been wrongly formulated.

These are the medicines being dispensed to our mothers, sisters and wives in Ghana today. Just imagine the havoc that is being caused. What is the point of free maternal care when pregnant and nursing mothers are being injected with poisons?

We need systems to root out corruption, which is at the root of this problem

The Pharmacy and Poisons Board has issued an alert against fake snake anti-venom that has found its way into the African market particularly the Kenyan market.

“The board would like to notify the general public of the following falsified and unregistered anti-snake venom products in circulation,” the regulatory body said in a statement to media houses.

The second anti-venom named by the board is indicated as ‘Ant Venom’, and has no manufacture, dosage and usage instruction details.

Most of them also don’t have qualified persons to track adverse reactions and advice Doctors Pharmacist,Techs ,and nurses of antidotes when the need arises.

IN Ghana, most Anti snake serums procured by MOH are substandard and do not combat the effect of most local Snake venoms. Most of these product suppliers do not submit clinical trials of the products to indicate that they can be efficient against the snake venoms of the country. ,some of them might have issues with their mother country or WHO.

Distribution of emergency drugs are not the best, cold chain systems are broken along the line putting patients at serious risk.

Like the GFA, over the years, Some Health Authorities like MOH, FDA, Pharmacy Council, Medical Stores, Pharmaceutical Society of Ghana, procurement directors at MOH, are in bed with some suppliers thereby allowing this circumventing and manipulating of procurement processes and standards to prevail.

The Minister of Health, the FDA Boss, the Registrar of Pharmacy Council, the Chief Pharmacist should be called to address these critical issues as it is leading to the deaths of innocent Ghanaians.

Government should encourage procurement from local industries where monitoring is done right from production to distribution. It is our Hope that our health would no longer be compromised.

In a presentation by the chief pharmacist at the Annual General Meeting (AGM) on Thursday 2nd August, she admitted that antibiotics in the country have developed microbial resistance.

In June 2018 GUTA had a press release that brought attention to the influx of fake rapid diagnostic test kits in the market.

On June 21 2018 the FDA released a communiqué alerting health facilities of possible procurement of falsified coartem 20/20. This was after Novartis the original manufacturer had complained to the FDA about the circulation of this falsified product with their name on it.

With the oxytocin, the quoted price in the NHIS list is 0.21p……from a previous one of ¢5 per unit. After the research on uterotonics a German brand of oxytocin was what was procured by MOH at ¢5 till this year that they have changed to new procurement price of 21p.

For the fake anti snake serums I have a confidential evidence that the brand (vins) procured by MOH was substandard. And I seriously challenge the FDA and MOH procurement director to provide documents on clinical trials on vins anti snake. Either they wouldn’t be able to or the trials would indicate that the anti snake is not effective against most venoms of snakes in the country