Watch What You Eat When Suffering From A Sleep Disorder 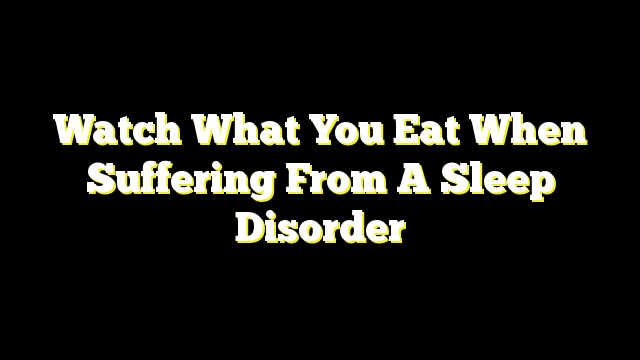 Watch What You Eat When Suffering From A Sleep Disorder

Human circadian rhythms in sleep and metabolism are synchronized to the daily rotation of the Earth so that when the sun goes down you are supposed to be sleeping, not eating. When sleep and eating are not aligned with the body’s internal clock, it can lead to changes in appetite and metabolism, which could lead to weight gain.

Timing is of the essence in managing your weight and getting enough sleeping at the right time is also important in aiding this.

In this particular study, there were 51 participants that were divided into two groups. One group was composed of the late sleepers who went to sleep on average at 3:45 am. They woke up at 10:45 am, had breakfast at noon, lunch at 2:30 pm, dinner at 8:15 pm and last meal at 10 pm. These late sleepers consumed half as many fruits and vegetables, twice as many fast foods and included larger amounts of full-calorie sodas and a total of 248 calories more per day. It was noted that the consumption of the higher calories was during dinner and late at night. From this study alone we can see that if you are a night owl or have difficulty sleeping then the likelihood that you are going to reach for the calorie-rich, high-fat foods is much higher than if you stick to a normal sleep cycle. This is especially important for those individuals that work night shifts and make a regular habit of working late at night and sleeping for less than five hours per night.

In a separate study, the effects of insufficient sleep on weight gain were investigated based specifically on energy input and expenditure. Sixteen adults, who were in good health, participated in a 15-day in-patient, controlled environment study. During the first three days, the participants’ eating habits were regulated so that they only ate enough food to maintain their initial weight and they were allowed to sleep a maximum of 9 hours.

The participants were then divided into two groups where the first group continued to sleep 9 hours per night while the other group was only allowed to sleep 5 hours per night. A typical work week was mimicked with this sleep pattern being maintained for 5 consecutive nights. Both groups were allowed unrestricted access to the meals and snacks which consisted of low and high-calorie foods. After five days, the groups were switched and the same pattern was followed for the other group. Researchers found that when the first group moved from restricted sleep to the longer sleep period the calories they consumed decreased.

The researchers saw a decrease in the consumption of fat and carbohydrates and thus, this transition resulted in a slight weight loss. It was also found that men and women responded differently to the sleep restriction phase. Men gained weight in the 9-hour sleep phase while women maintained their weight but in the restricted-sleep phase, the opposite was true. Women were more likely to gain weight with restricted sleep.

Dr Michael Breus, Ph.D., or better known as The Sleep Doctor is well known for his research into sleep and sleep disorders. He said recently that sleep deprivation causes neurological disorders that may affect our judgment when making healthy food choices.

The study he referred to had this to report:

This study found that lack of sleep is associated with diminished activity in the brain’s frontal lobe, an area that’s critical to judgment and complex decision making. Participants who were sleep-deprived made different, less healthful food decisions than those who were not. And in this study, researchers found that in people who were sleep-deprived, the reward center of the brain was more strongly activated by unhealthy foods than in those who had received sufficient sleep.

If sleep can impair our judgment in the decisions we make with regards to food then sleep or rather the lack thereof plays a much larger role in our ability to lose weight than was originally thought. It is no wonder that so many people are struggling with obesity and the disorders that come with being obese. The average person sleeps around five hours a night instead of at least eight hours, thus affecting their hormone levels, metabolism and now the brain is also telling them to choose unhealthy foods as well.

If you fall into the category of the night owl and are struggling with your weight then you need to relook at what foods you have at your easy disposal when working late. If you are going to be working late then it is imperative that you take the time to prepare meals and snacks that are healthy and keep the unhealthy, unhelpful foods far from your reach. A better solution would be not to have access to unhealthy foods and to get the right amount of sleep. For those that work shifts, it is especially important to make sure that you consume the right foods or else you will become part of the statistics on obesity and possibly harmful diseases, as a result.

Take the time to assess your life. There are ways to change how much and when you sleep and what you eat. Now that you know what affects your weight, you can make the change. Change is in your hands and yours for the taking. You don’t have to settle for an overweight lifestyle now that you know the facts. Make the change today and become a leaner, healthier, all-round better you.

14 Diabetes Myths You Should Not Believe

Is Cardio Good For Weight Loss?

Is Cardio Good For Weight Loss?